It was still dark, and Jeremy Wilmotte and Lachy Lemarseny were nervously trying to pick their jump-off moment, when Billy Morris came down the path, slipped over, and landed on his arse in the mud.

“I couldn’t see where I was going!” Bondi’s veteran superstar lensperson claimed later.

Billy wasn’t the only one to fall that day. For the next five hours or so, the crew who’ve made Wedding Cake bombie their go-to challenge in massive southerly swells threw themselves against this woolly mammoth of a wave, heedless of its desire to smash them into very small pieces indeed.

Joel Pilgrim, marvelling at the sight. “This was at the end, when everyone had gone in,” says Bill. “I think Joel was the only paddler left, Matt and Jamie were on their ski somewhere. It almost looks easy here, and the truth is, the day was pretty clean for what it’s normally like.” Photo: Morris 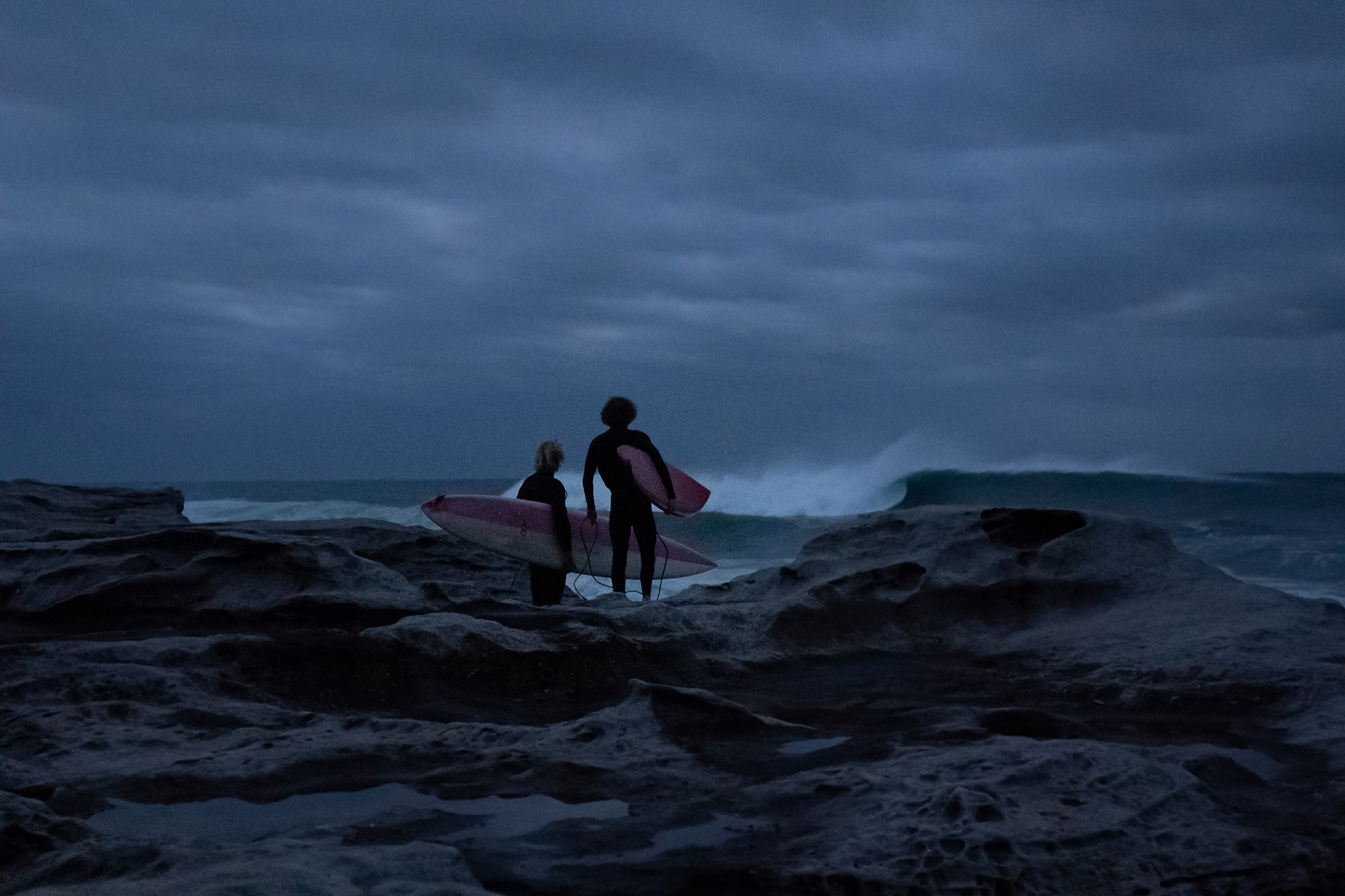 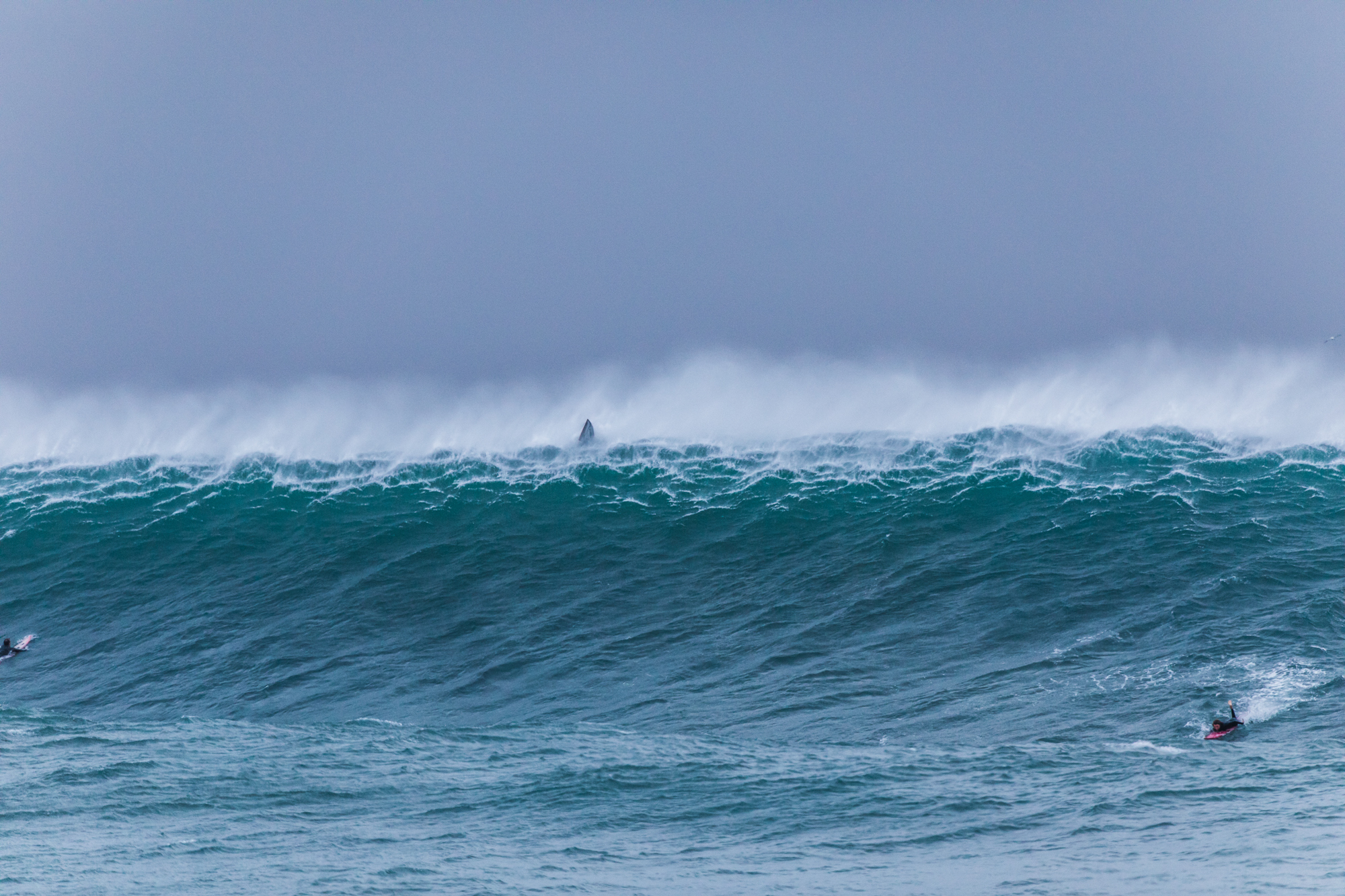 For a while, the crew scratched and drifted, trying to get a handle on the thing. Lachy on right, catching to no avail. Photo: Morris

Epic rides and epic stacks abounded, including a superb takeoff-to-near-make by Lachy and a spectacular, possibly near-suicidal pull-in by Matt “Howie” Howard, who’d been whipped in by tow partner Jamie Reid.

Surfline’s Hannah Anderson was down there almost before anyone. “Lachy and Jeremy were getting ready up at the cars,” she says. “There was a lot of nervous energy in the air. I walked over to have a look and saw the biggest set I’ve ever seen out there. I don’t even know, 30 feet?

“Lachy came over and said, ‘It’s pretty heavy, hey.’ I said ‘You should have seen the set that just came through!’”

Lachy and Jeremy were the first out on what turned out to be Wedding Cake’s biggest ever morning. For a long time, maybe 45 minutes, they didn’t get a wave — stalking, trying, getting blown off, looking for position.

“There were 20-footers coming through that no-one even got,” says Billy. “They paddled way out to wait for those ones and quite a few smaller good ones came and broke inside, like 15-footers, 12-footers.” 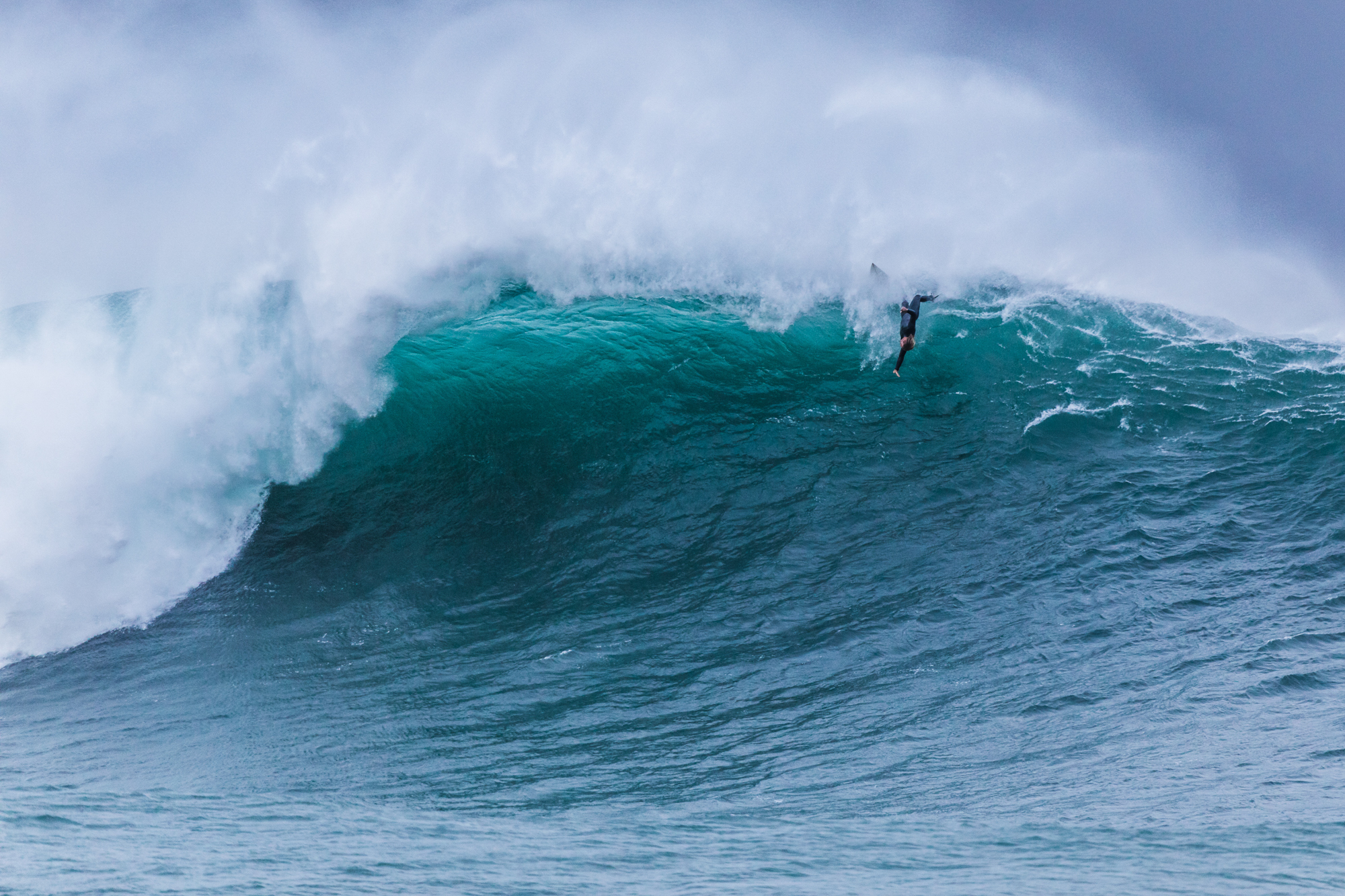 The wind kept holding people up in the lip. Jeremy, missing it but refusing to let it get away. Photo: Morris 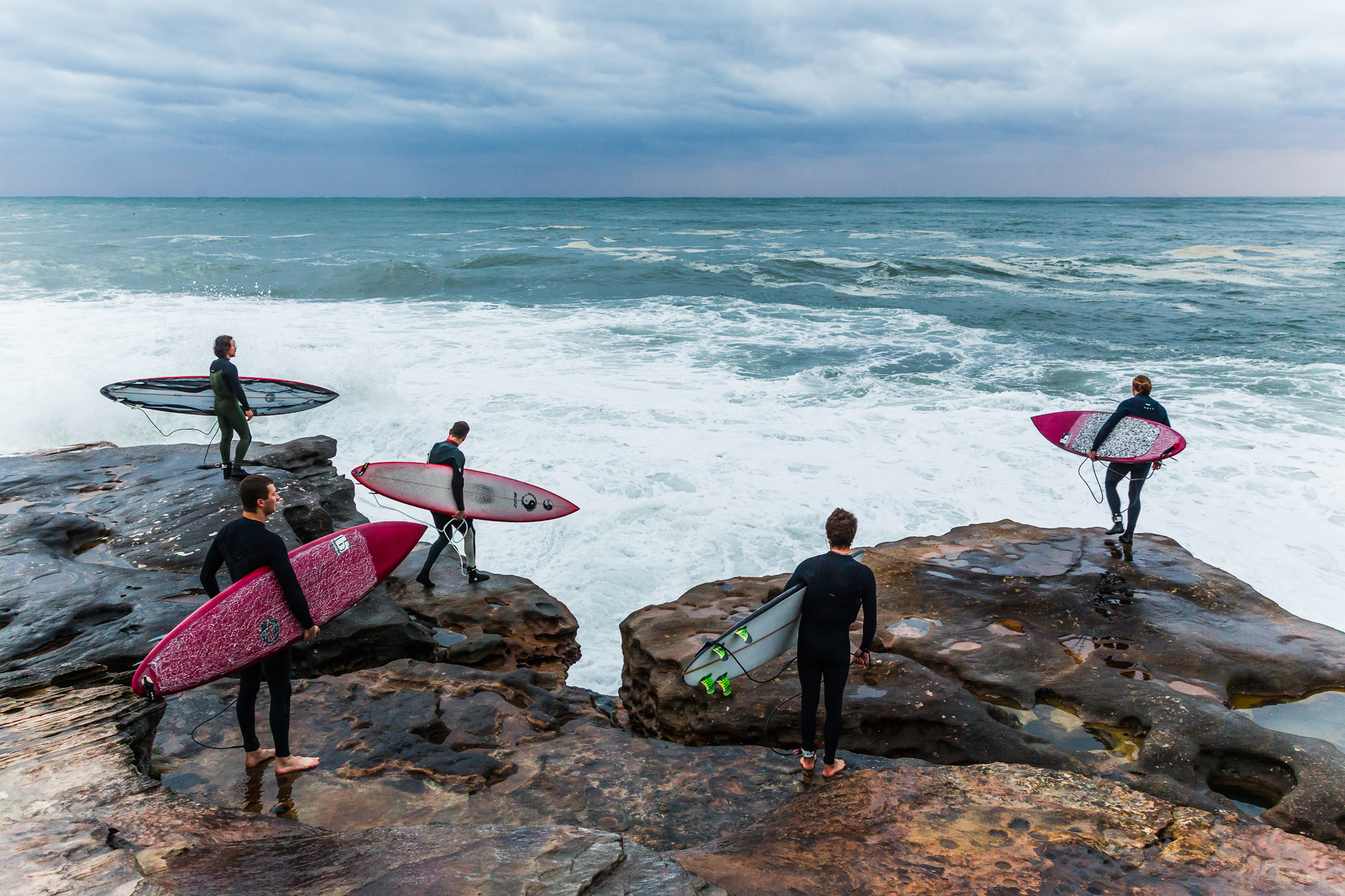 Second crew out: Josh Ku, Clayton Cantarella, Joel Pilgrim, Lars Zeekaf and John Walsh. “There’s so many big rocks in front there,” says Bill. “Every time someone walks down to jump off, there’s a murmur of, ‘Here we go’. You can dry dock, you can get washed back into the rocks, anything.” Photo: Morris

Another pack of paddlers jumped in, including Josh Ku and Joel Pilgrim, and slowly the crew began getting a handle on the situation. Then the skis began to show up: Jamie and Matt, and Dylan and Summa Longbottom, two or three more. Eventually five ski teams and around a dozen paddlers.

“That’s when the paddlers started getting a lot of waves,” says Hannah. Maybe the presence of the skis was a reassurance. Risk was definitely on everyone’s minds that morning. Bill recalls Joel Pilgrim sending him a text from the lineup, knowing Billy’s a trained firie: “Listen mate, I just want to let you know there’s a defibrillator under the back seat of my car.”

Billy chortles: “I was like, great! Thanks! I dunno if I want to know that…. But the skis, when they’re there, they’re always going to pick you up when you’re caught inside, and you know that. It’s when they’re not there that it gets heavy.”

You can see in the photos where that point was made on Wednesday. 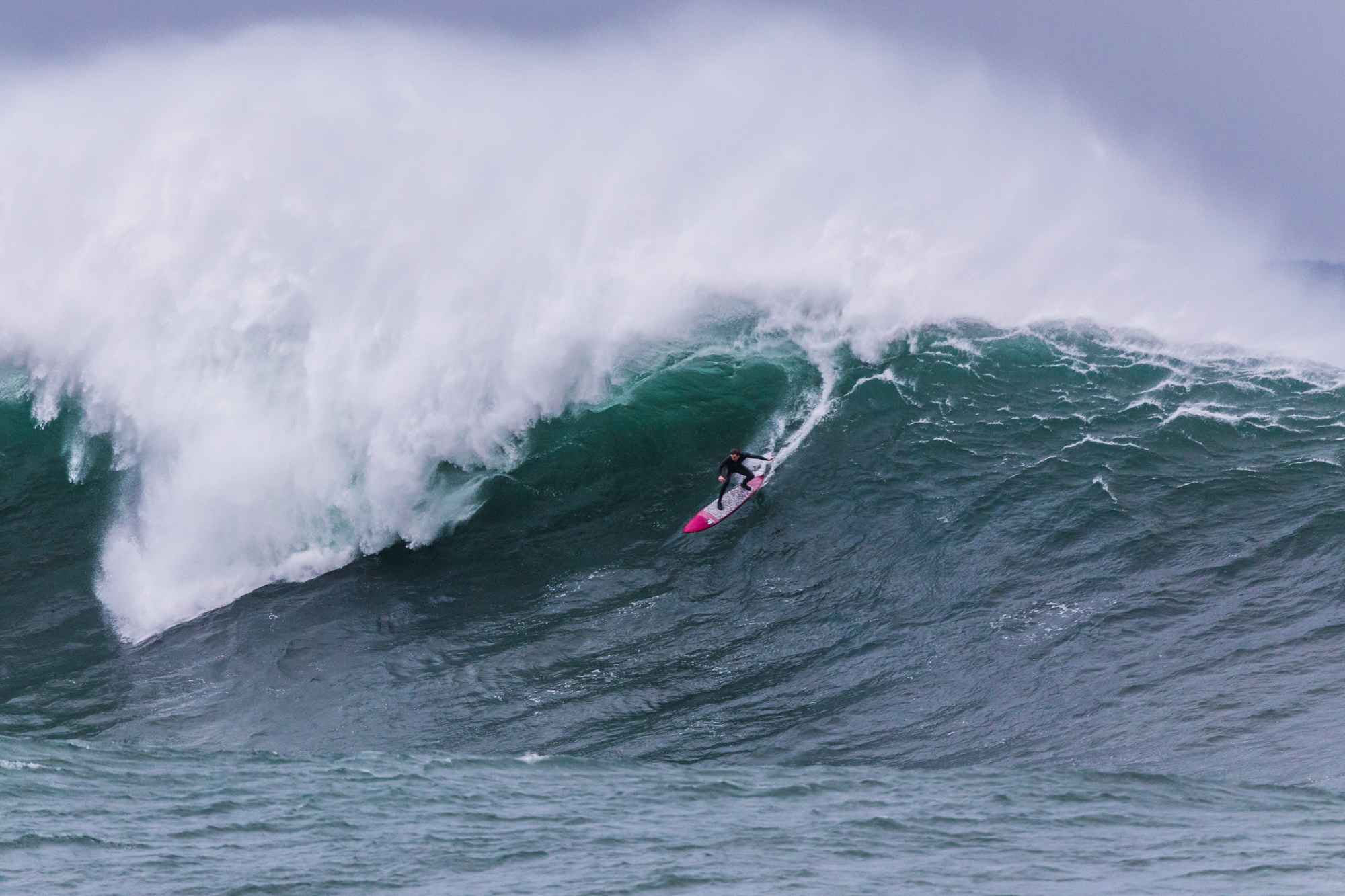 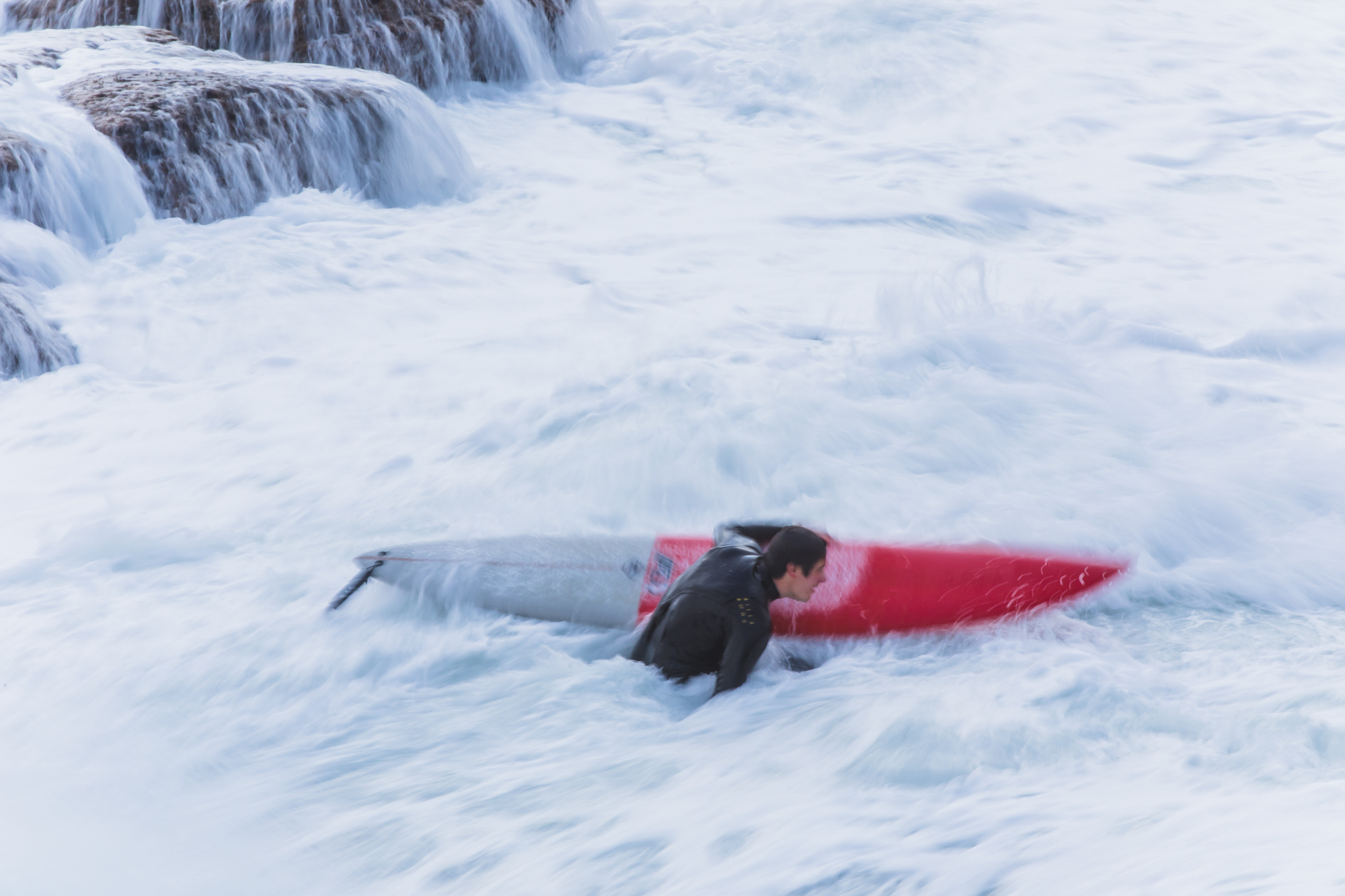 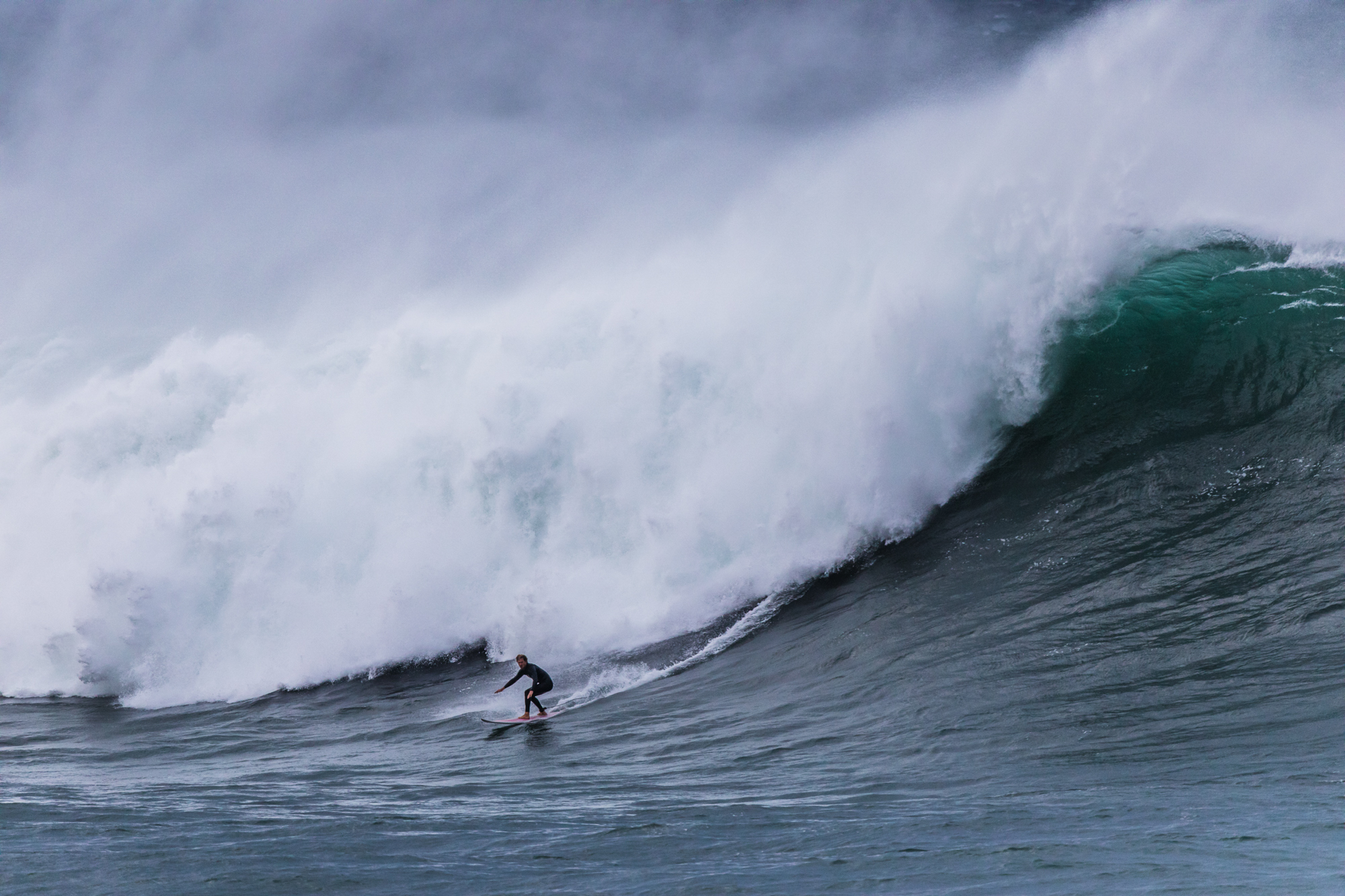 It might have taken a while, but he got a bomb. Jeremy Wilmotte. Photo: Morris 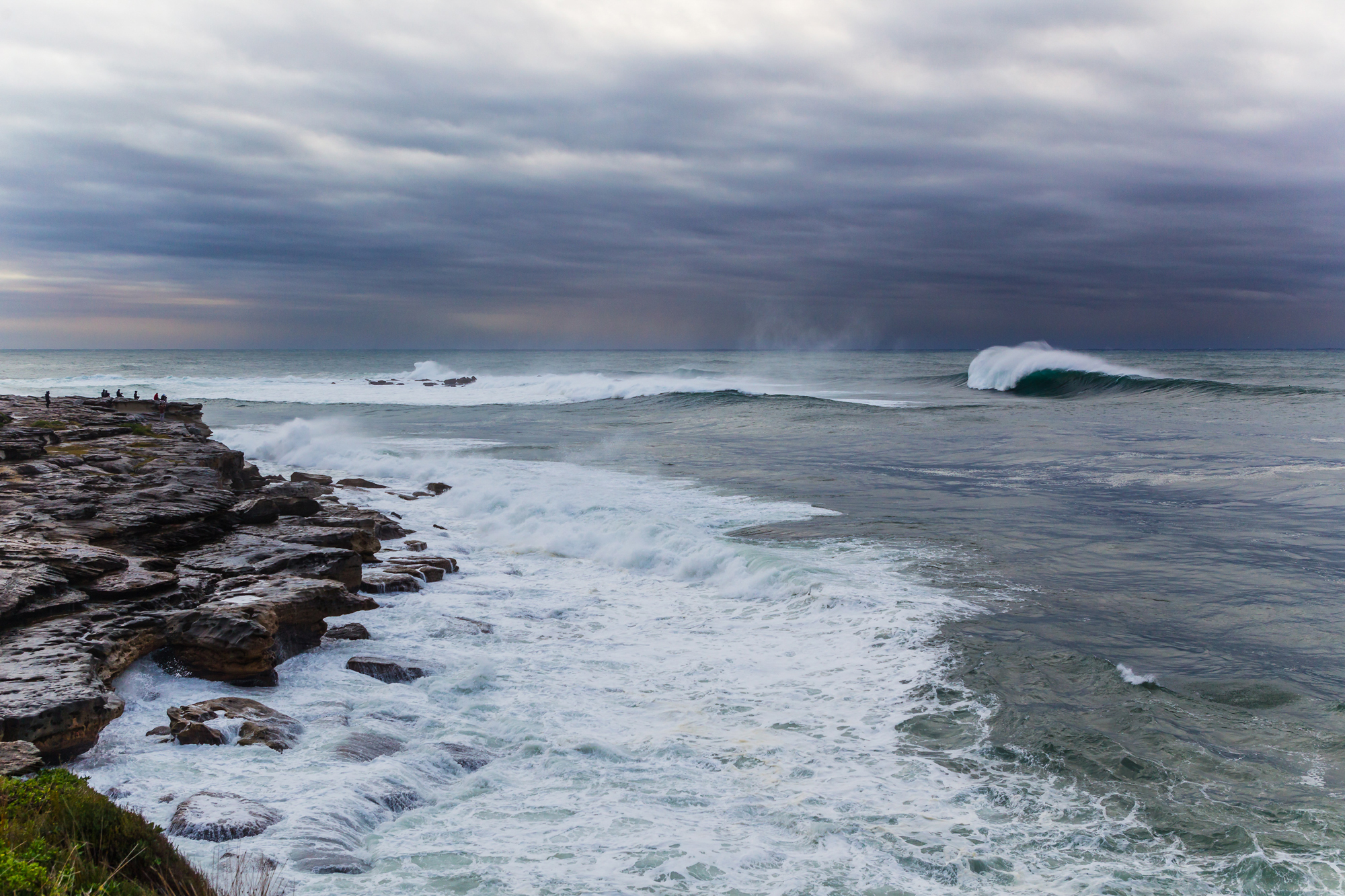 Another one sneaks under the guard, 8.28 am. Here you can see the full dimensions of the spot and the challenge, and that awesome jump-off. Photo: Morris 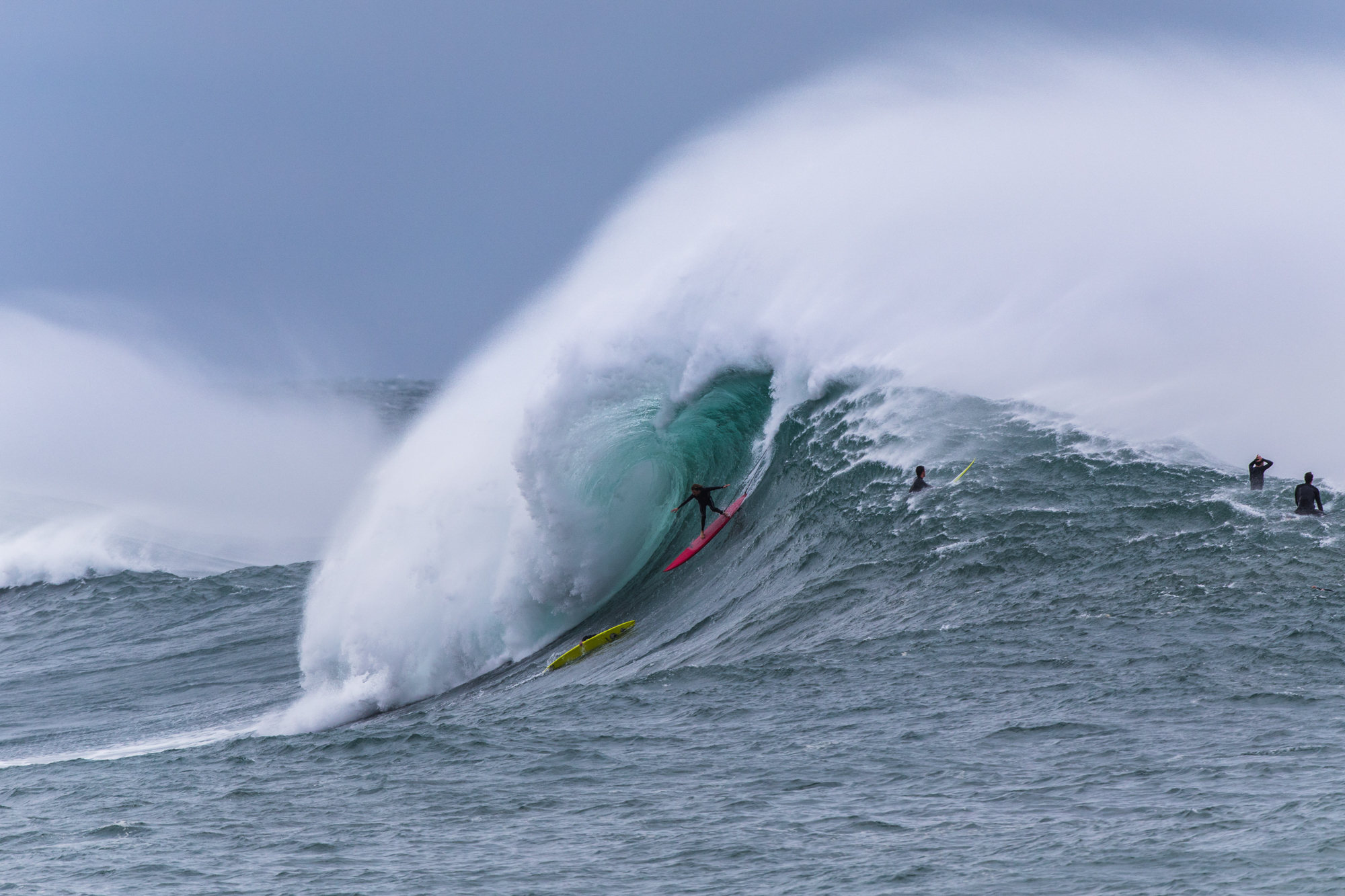 Six minutes later, 8.34 am, and Lachy gets the paddle wave of the session, while Oscar Tate (yellow board) tries to roll it. “Lachy did so well on that wave,” says Bill. “There’s only a fin or two in the water.” Photo: Morris 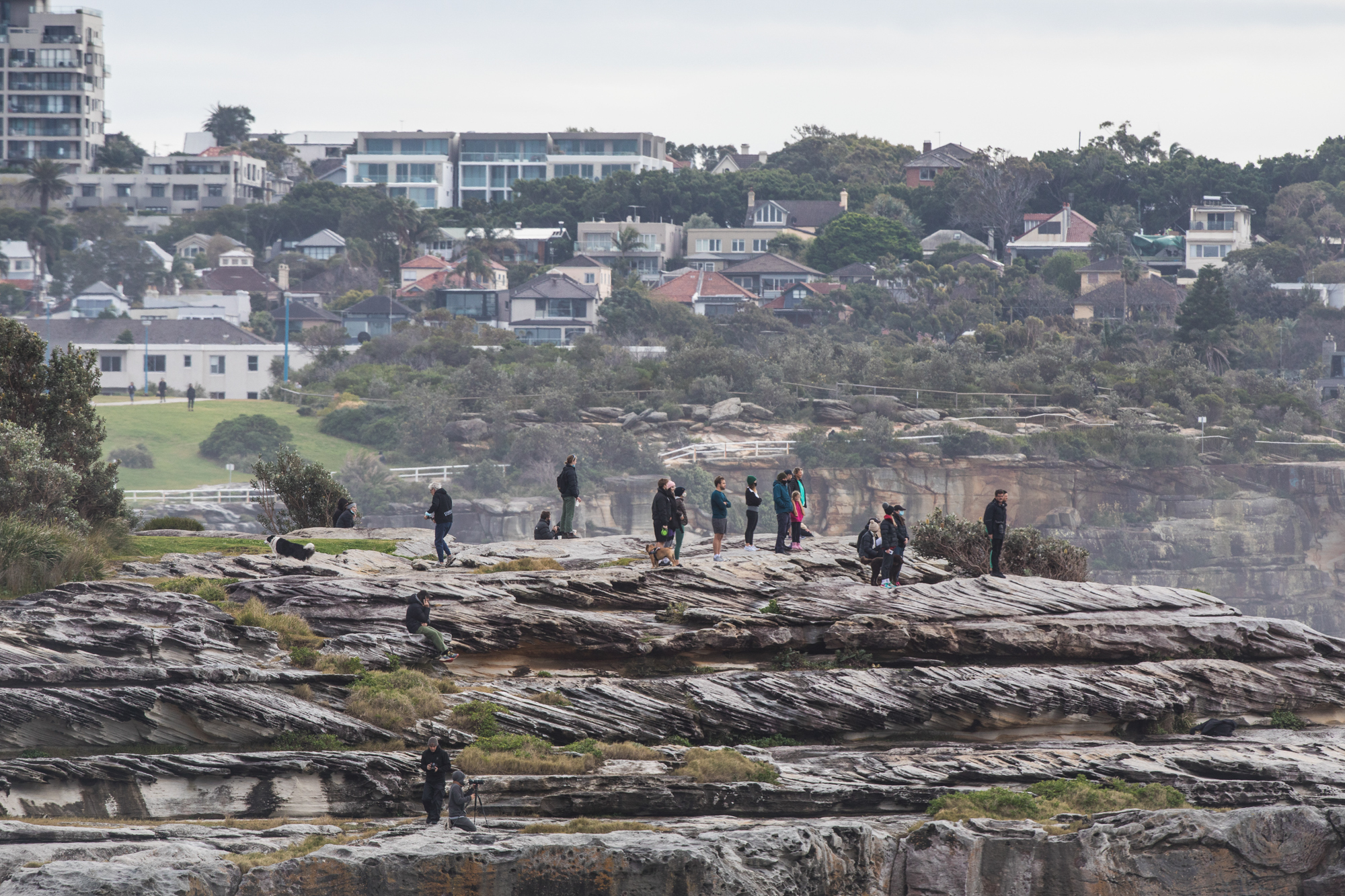 The weird thing is, this is all happening within sight of Australia’s biggest city. Photo: Morris 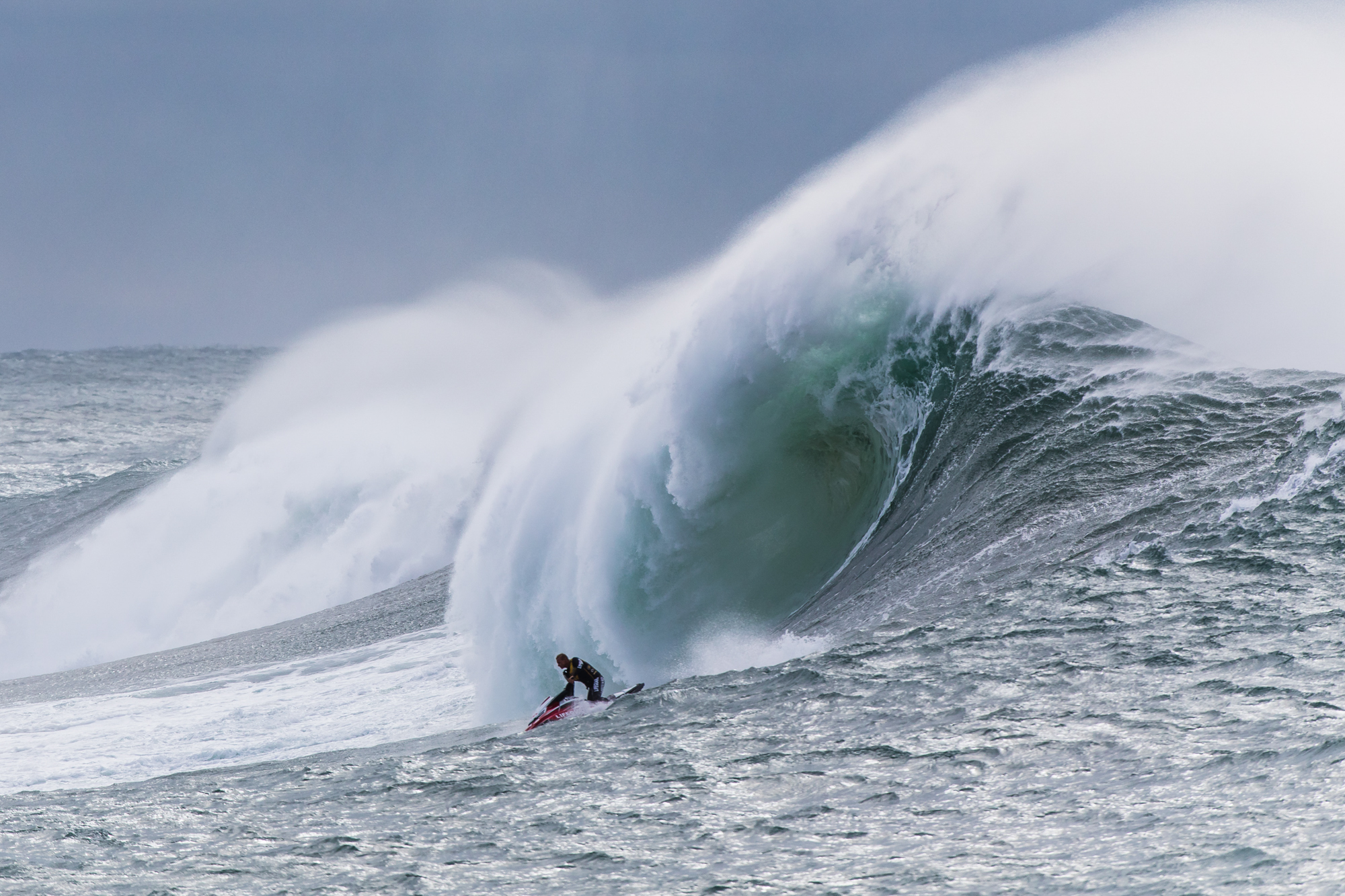 Lifeguard ski driver Matt Phillip. Josh Ku had organised him for safety back-up, which turned out to be a good idea. Photo: Morris 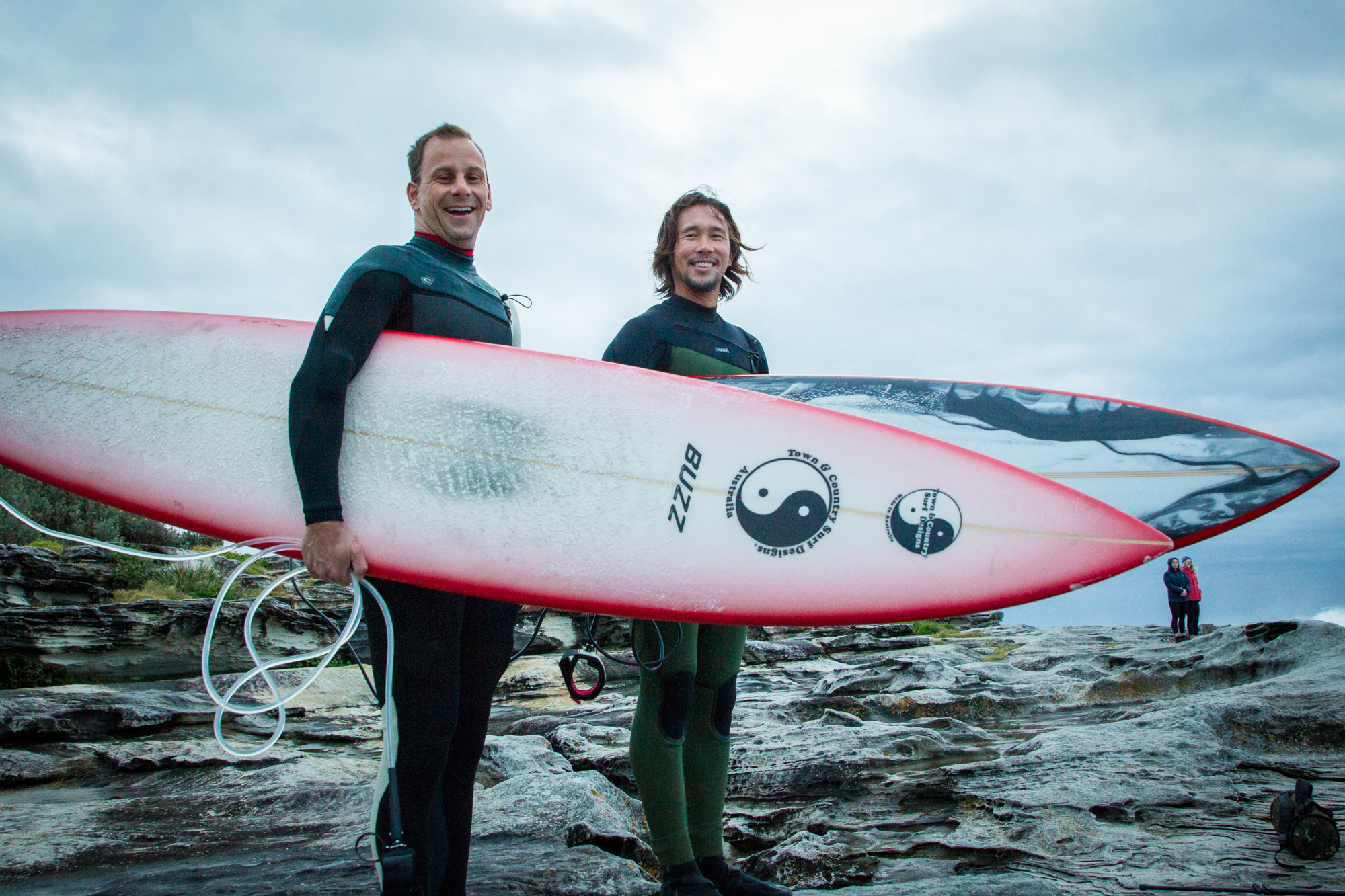 Really, days like this are just one big joke. Joel and Josh, ready to jump. Photo: Morris 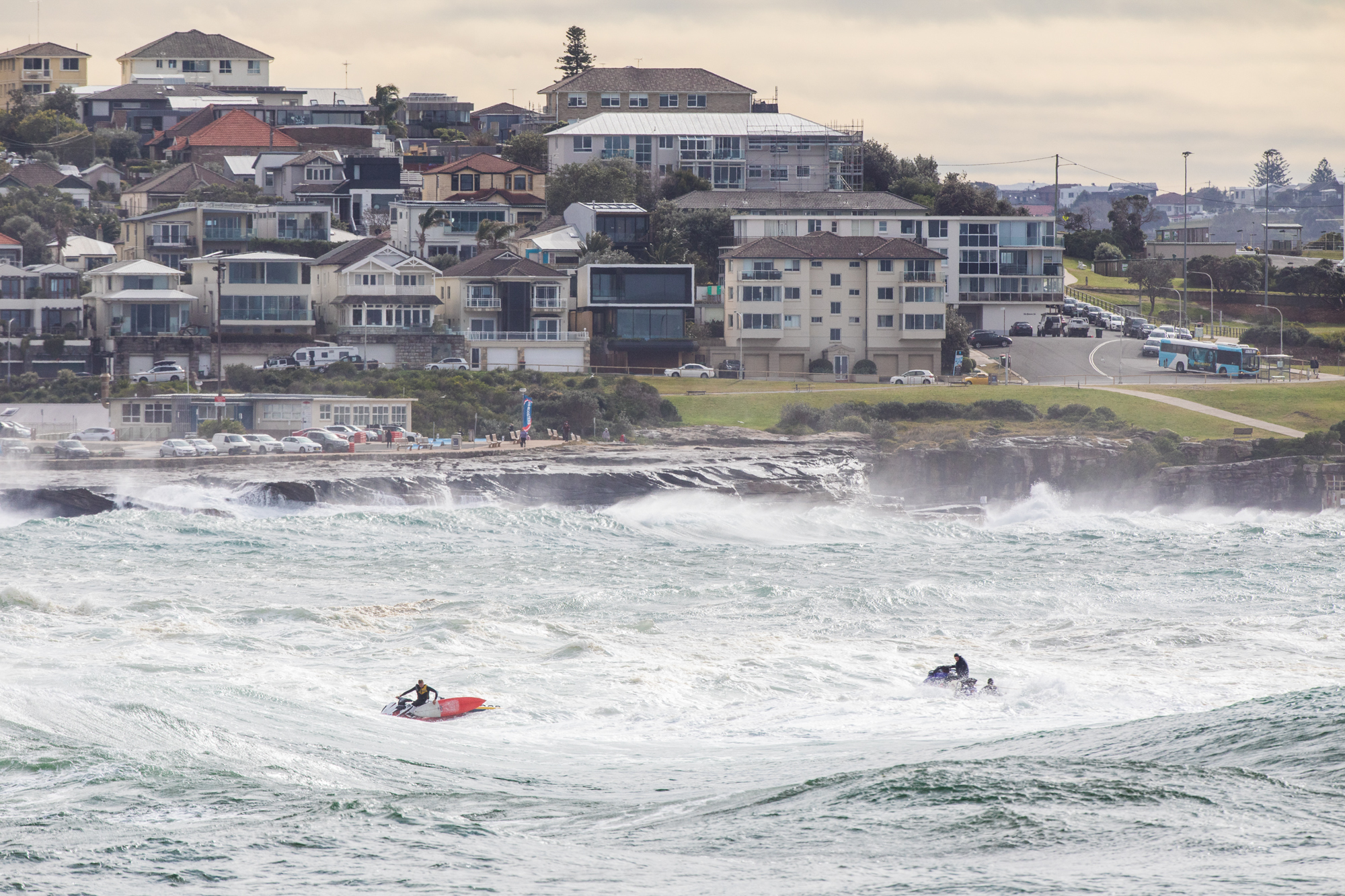 Skis to the rescue. “This was after a really big set,” says Billy. “They were getting flushed down into Coogee. That’s what always happens when this joint’s breaking.” Good times! Photo: Morris

Meanwhile, says Hannah: “You felt like something was going to happen. Then Howie got that one. I don’t know if you can even make a wave like that, it’s so almond shaped and changes every second. Maybe if you really hold a high line? But… it’s wild. It’s pulling into death.”

The normal crowd of eastern suburbs strollers and watchers was down. “I think people are a bit scared of just sitting there,” theorises Bill. “There’s cops everywhere, people are worried about being caught for not exercising or whatever. A lot of people walked past though. They’d stop, get out their phone, take a photo and keep going.”

You can’t help but wonder: what do these people even think of us? 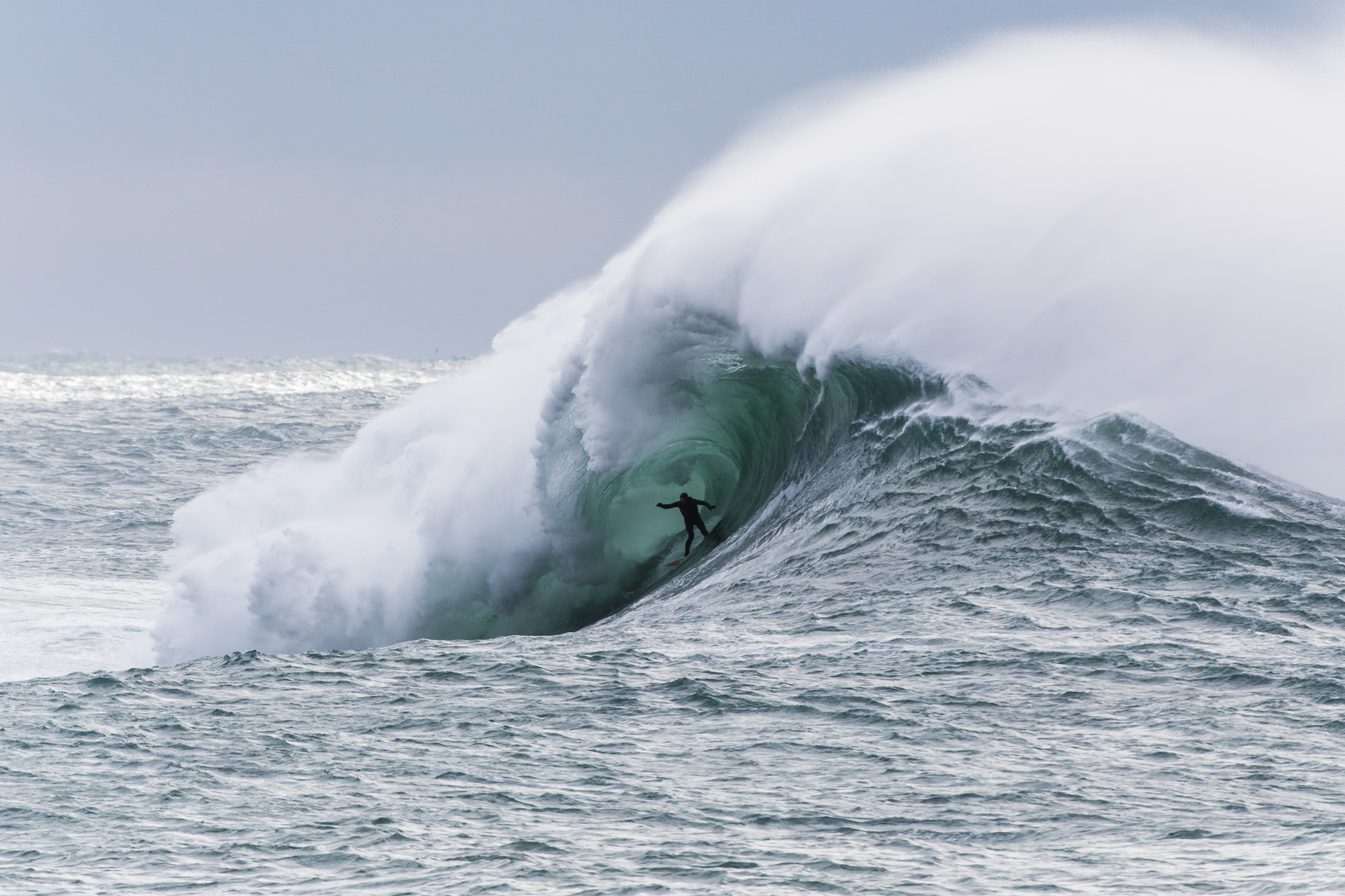 Matt Howard, barrel of the session, 9.22 am. “This was pretty late in the session.” Photo: Morris 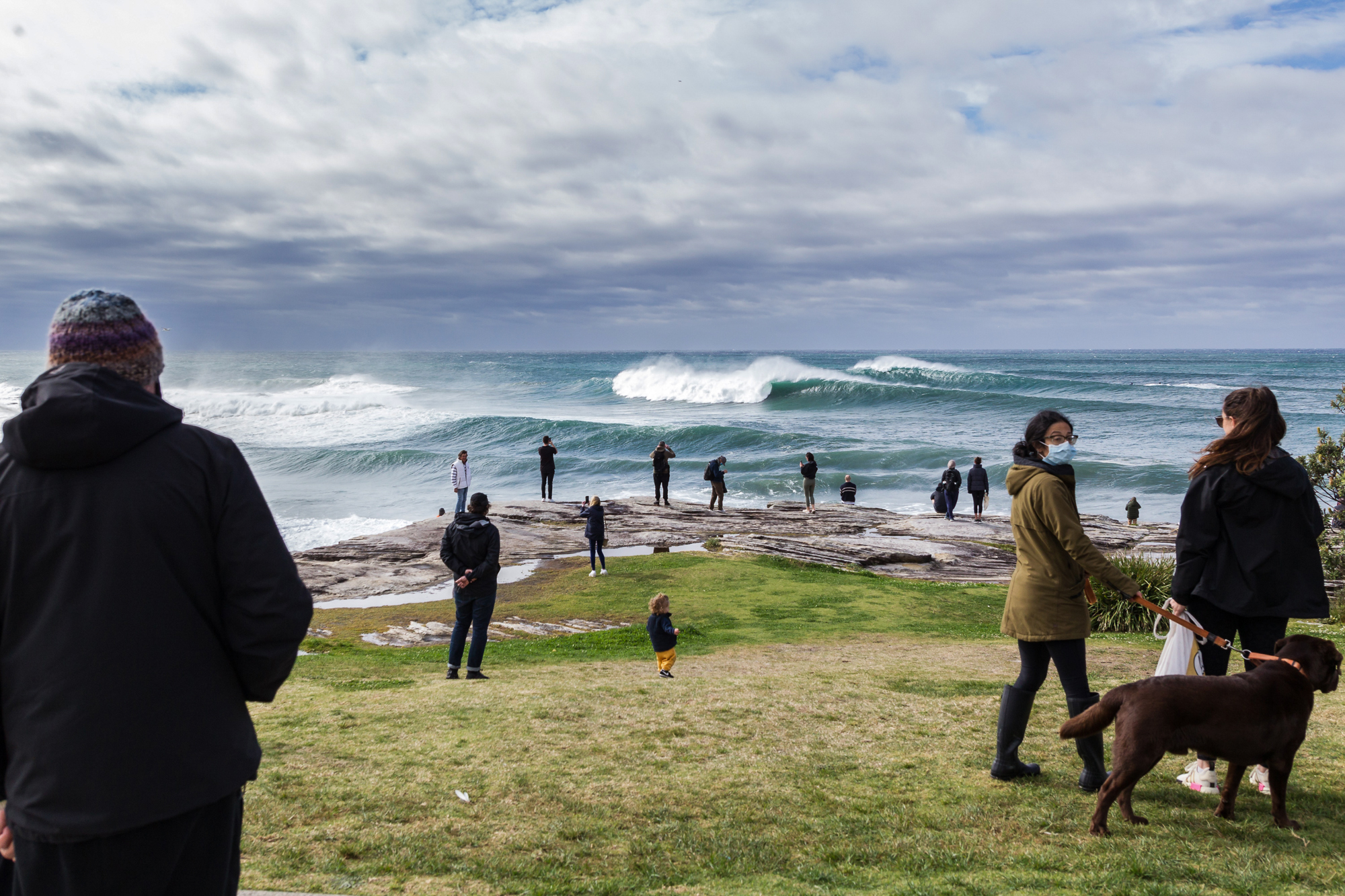 Empty set with dog-walkers. “This was around 11am,” says Billy. “Everyone had come in. We were trying to walk away and these sets kept coming through.” Photo: Morris

Anyway, so eventually a massive set did its terrible work, catching everyone inside, Josh Ku snapped his board and went through the two wave hold down cycle, the skis helped pick everyone out of the mess, and by 11am nobody was left but Matt and Jamie on their ski.

Hannah and Billy were left standing there. They tried to leave, but sets just keep coming through. “We were going, oooo, that was mental!” says Hannah. “What a day. It just chewed everyone up and spat them out.”

Here’s Hannah’s clip from the day. Way more to come from this session and others.

And here’s the Narrabeen version of Wednesday August 25.

There’s an epic weekend in store for much of NSW. Check the Forecasts: Sydney  | Newcastle | NSW South Coast | Northern NSW

We use cookies on our website to give you the most relevant experience by remembering your preferences and repeat visits. By clicking “Accept”, you consent to the use of ALL the cookies.
Cookie settingsACCEPT
Manage consent

This website uses cookies to improve your experience while you navigate through the website. Out of these, the cookies that are categorized as necessary are stored on your browser as they are essential for the working of basic functionalities of the website. We also use third-party cookies that help us analyze and understand how you use this website. These cookies will be stored in your browser only with your consent. You also have the option to opt-out of these cookies. But opting out of some of these cookies may affect your browsing experience.
Necessary Always Enabled
Necessary cookies are absolutely essential for the website to function properly. These cookies ensure basic functionalities and security features of the website, anonymously.
Functional
Functional cookies help to perform certain functionalities like sharing the content of the website on social media platforms, collect feedbacks, and other third-party features.
Performance
Performance cookies are used to understand and analyze the key performance indexes of the website which helps in delivering a better user experience for the visitors.
Analytics
Analytical cookies are used to understand how visitors interact with the website. These cookies help provide information on metrics the number of visitors, bounce rate, traffic source, etc.
Advertisement
Advertisement cookies are used to provide visitors with relevant ads and marketing campaigns. These cookies track visitors across websites and collect information to provide customized ads.
Others
Other uncategorized cookies are those that are being analyzed and have not been classified into a category as yet.
SAVE & ACCEPT